this is one of my 30 that i honestly was a bit concerned about because clearly i could choose to be "crazy Jesus girl" and force a conversation about my faith and my Jesus on somebody, but that's just not how i roll, nor do i believe it's the best way. leave it to Jesus to have the person i was talking to go ahead and bring him up in conversation - he would... he's cool like that.

so one of my dearest friends got married last night (yay emily & ed - beyond stoked for you guys!!!) 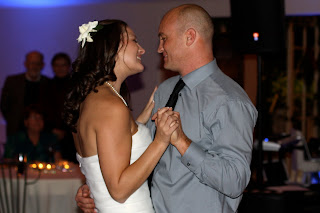 and what happens after the wedding and dinner? a dance party, of course. i was out on the dance floor, busting my amazing white girl moves with some other young life peeps with amazing white people moves (along with the de la llave family that actually has moves) and started hangin' in a group of cousins visiting from new zealand. now that's a good time.

so... on the dance floor, corona lime in hand at one of my best friends' weddings, one of the kiwi cousins, james asks me point blank,

at this point i begin to explain to him the difference between a religion and a relationship and that for us it's much more than just subscribing to the "laws" of a religious code so that we can be part of the club. (some of you may disagree with this and that's fine. let's chit chat about it. please.)

it's here that he suggests we move off the dance floor so we can stop yelling and we actually have this 15 minute conversation about Jesus. about how Jesus didn't come to condemn people or not let them be part of a "club" he was starting. he came to include not exclude. he came so that we don't have to live by laws and so we don't. we choose to live a certain way and make certain choices because that's how we feel is the best way to live based on scripture and our individual relationship with Jesus, but you're not "excluded from the cool kid Jesus club" if you don't agree - God didn't create puppets, he created people.

he asked some questions about the difference between what new zealand deems "religion" and what us crazy young life people see as a "relationship" and then explained to me that where they live it's a you're-in-or-you're-out religious society. if you go to church and subscribe to a certain set of rules, you're in. if not, you're out. and i got to tell him that with Jesus you're never uninvited or "left out," you just have to choose to be in. i got to tell him that we are also church people and that those people probably aren't bad people and they probably really do care, but many of them are just scared to go outside of what they know and have these conversations with people who don't.

something had made james curious about the way we live. our lives demanded explanation and that's just how it should be if we're livin' for Jesus. maybe it was the golf game earlier that weekend with scott, the YL regional director who he said was one of the most interesting and kind people he'd ever met or maybe it was the way we lived life and celebrated ed and emily with such joy and reckless abandon without needing to drink too much (or not drink at all) to have fun, but he saw something different. i don't know what God's going to do in james' life but i'm grateful for our dance floor chat and i'm grateful that my having a beer with him while being a Christian was what allowed to feel comfortable enough to bring up the conversation. and mostly, i'm grateful that i got to share the Thing that means the most to me with a perfect stranger.

mission 6 accomplished. thanks for that one, Jesus.
Posted by Unknown at 10:11 PM