now this, my friends is a sad, sad story. probably the saddest of all 30 before 30's.

so there's this guy named bono, he kinda "is" U2. once upon a time he was doing a rehearsal in germany and he slipped a disc in his back - bad enough that he needed surgery almost immediately. this was about a week before the US tour. this meant, our concert (and all others on the US tour) was cancelled. We were told we'd get a new date for the concert. The end.

TRAGIC!!!! i honestly almost cried. this has probably been one of the things i've looked forward to the most on that list - no lie.

so this is the email i received today:
Attention ticket holder!

We just learned that your event has now been rescheduled:

Your original tickets are still good – we hope you can make it and enjoy the show!


we hope you can make it to the show - really U2, OVER a year later? i mean, this girl's not givin up her seat for anything, but this now will not happen before i turn 30 and it technically can't be crossed off my list. but i still will mark it as done because it was beyond my control. something i learned while training teams to do overseas missions is this: "blessed are the flexible for they shall not be broken." so flexible i am and broken i'm not.

so erin & casey, june 17th it is. bono, how about no more shannanigans at rehearsal okay? 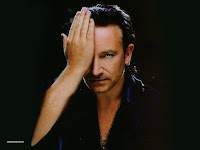 at least not after next march.
Posted by Unknown at 11:18 PM