I took a job with an incredible organization called Students International about a year and a half ago knowing full well that part of my job was to lead mission trips - something I've been hugely passionate about for years and have done with enthusiasm. But then we had a baby. We went to Costa Rica when I was 12 weeks pregnant, but then I got a free pass for the last 16 months because, you know, pregnancy, childbirth, recovery, nursing - all the things. In November, Jarred and I made plans to take a group of college students to Nicaragua with our good friend Joel and we've been so excited about it since then. But as soon as the reality hit that I would be weaning our baby girl and leaving her for a week, I almost bailed about 1000 times, including during our layover in the Houston airport. 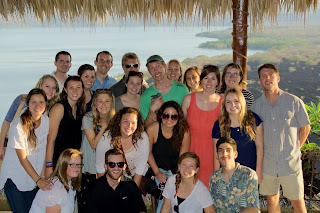 I called a friend and colleague and said, "How do you leave your babies? I don't think I can do it. I'm going to back out. Talk me down." And she did. Bless her. Her advice was simple - "The first time is the hardest. I promise it will go by quickly once you get there and get busy. Give yourself permission to come home or to not go if your childcare situation isn't working out or your kid is hysterical." All of these words were helpful, but in my logical mind it just felt so wrong to leave my 10 month old and go to Central America for a week.

Here's what it came down to for me - obedience. All the mommy guilt, positive self-talk, awesome grandparents babysitting, knowledge that there's a 99% chance that it's all going to go down just fine - all of that was great, but the kicker for me was this thing that we often like to ignore called obedience. The bottom line is that God has called me to work for SI to bring people into his story across the globe. I have no doubt about that. Because of that, I am called to be obedient when he asks me to "go" - plain and simple. What I want my daughter to see is that her parents are obedient. I want that more than anything and if I were to back out because I was scared or because of her, it sends the wrong message - to her, my college gals I walk with, my friends, the students on the trip, our church community. Don't get me wrong, not a single person would have faulted me for staying home with my 10 month old baby, but I knew that I knew that I knew that we were called and I was to be obedient to that call. 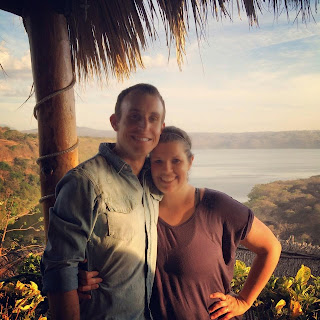 Jarred and I always want our kids to see our hearts for the nations, for the poor and we want them to know that God is bigger than their little world. As soon as they're big enough to wear bug spray, you bet they'll be coming with us, but for now, our job is to continue to be obedient. That's what we want them to know about their parents and see modeled. And we need to start practicing that now - not when they're 3 or 6 or 10, but now, when they're tiny.

The crazy part is that I unexpectedly got to share this with the women in Nicaragua who thought I was literally nuts for weaning and leaving my baby. The even crazier part is that despite the cultural differences and the fact that it's not something they would ever do, they understood. When I explained to them that it wasn't that I wanted to leave my baby and that my heart was torn in shreds when I put her to bed the night before I left, but that I came because I care about them and because I want my daughter to see me being obedient - somehow, they understood (and I even got baby snuggles while I was there, thanks Jesus). 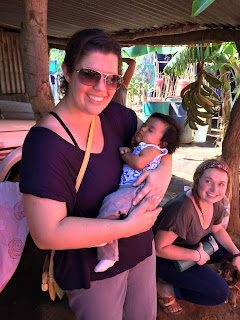 One of my Nicaraguan colleagues spoke such truth to me the night before we left. She told me how much she respects me as a mom and how much she admires my desire for my kids to know God's heart for the world. She told me I'm a good mom and that God used me in her life last week, just when she needed me. And I knew that I was in the right place for all the right reasons. Obediently saying "yes" was the hardest part… that and getting on the plane.
Posted by Unknown at 10:14 AM