team, mission 2/30 has been accomplished today. here's the story: i have this sweet part quasi-cousin/part friend/part pure amazingess person who goes to college at texas tech and is on the rodeo team. her name's olivia and she's rad. now i'm here in texas for a few days, visiting the fam and some dear friends and doing 2 art shows this weekend, which is actually amazing and will be another post for another day, but back to olivia.

olivia rides horses, well one horse more frequently than others... his name's LT (which i find awfully appropriate considering i went to college with the guy!). 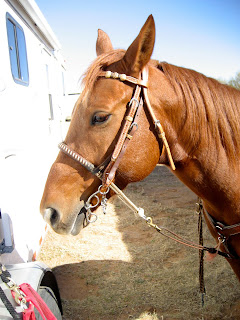 so yesterday we're talking about hanging out and i say,

"wait, i should come to the barn with you tomorrow and see where your horse lives and hang out with you. better yet, i should RIDE YOUR HORSE because that's on my 30 before 30 list." 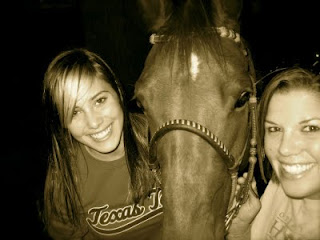 this picture below is a bit deceiving because if we're honest, LT did not enjoy the ride much and neither did liv or i. clearly he doesn't look happy... i had a runaway horse who was acting like a teenager when his parents go out of town for the weekend. man alive, that guy tried everything he could because he knew i wasn't the boss of him. so... a couple times around the arena, a run away horse and a raw, swollen bruised hand (from pulling on the reigns so hard), i smiled for a photo to prove i was there and called it a day on the horseback riding. 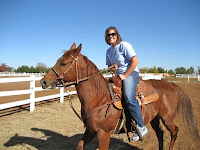 whew. liv then took him for a bit of a non-joy ride and reminded him of who's boss. good thing because not only did he run for the hills, but he also tried to drink my starbucks. this guy gave me a run for my money, but as is the theme of the list - it made for a good story.